About the School of Nursing 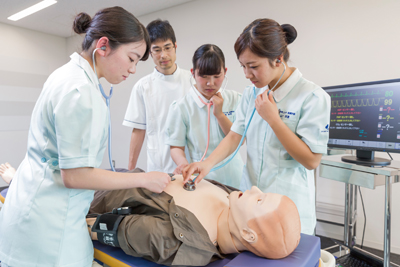 The School of Nursing of the University of Shizuoka was founded in April 1997 as the fifth department of the University of Shizuoka. Since then, the school has been preparing nurses, public health nurses, and in 2016 marked its 20th anniversary. The school was founded at a time when the national upsurge in the establishment of schools of nursing in Japanese universities was beginning. Subsequently, the school's evolution has coincided with the development of nursing education in Japanese institutions of higher education. By preparing competent graduates in the field of nursing, public health, the school has contributed to the promotion of local public health, medical, and welfare status in Shizuoka.
In the current healthcare and medical environment, nursing professionals are expected to have advanced professional knowledge and skills to perform an important role in facilitating the living of people with differing healthcare needs. As more coordination between various healthcare teams and medical welfare professionals is becoming required, nursing professionals are required not only to perform their traditional nursing roles, but also to be coordinators between patients and other professionals involved in their care.
At the School of Nursing, our educational goal is to prepare nurses who: are able to contribute to the development of nursing science by demonstrating their competencies as nursing professionals; can become the main link that connects various clinical specialists, while based on the patients' viewpoints; and can integrate the practice of nursing with research.